Get To Know Your Colleague: Shane van Niekerk 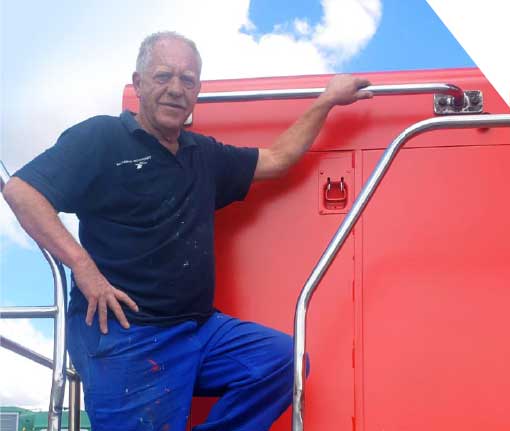 Born and lives in South Africa.

During his 2-year national military service period he served as a (PTI) Physical Training Instructor, he has also worked in and visited more than 15 countries.

Shane matriculated at Heidelberg High School in TVL 1976. He earned a NTS3 Technical Certificate at the Johannesburg Technical College. He further completed a Post Graduate Certificate in Management at Henley Management College.

He started apprentice training as a signwriter and spray painter at South African Airways (SAA) Technical in 1977, then qualified as an aircraft spray painter at the Olifantsfontein Testing Facilities in 1982. Shane completed various airline certification exams towards becoming an Aeronautical Supervisor of aircraft painting at SAA.

He eventually became an Aeronautical Superintendent and was involved in several projects such as the painting of the Shosholoza Olympic Boeing 747 and 1995 World Cup Good Luck Bokke Boeing 747. He left SAA to start his own aircraft painting company and worked in several airline companies all over Europe, Asia and Africa. He worked as a contractor for the South African Railways PRASA as a production and quality manager on all Shosholoza and Metro train coaches, applying flame-retardant paint. South African Railways ended all contractors’ contracts and thereafter, Shane started working at Traxtion Sheltam in August 2020 as a spray painter.

Shane is based at the Rail Services Hub in Rosslyn within the Willie Nieman Building as a Spray Painter on all Traxtion locomotives and all 3rd party locomotives. Tasks include repainting, applying company logos, decals and emblems including assisting with on-the-job training of all paint shop personnel.